The BlackBerry Playbook is a 7 inch tablet which is RIM’s attempt of getting a slice of the tablet market. While its interface is considered to be quite good, the downside of the tablet is a smaller number of apps available for it, since it uses its own OS, not Android or iOS.

The Playbook’s advantage over other tablets is that it is designed to function as both a regular model and as a tablet designed for enterprises, something that RIM is well known for.

The Blackberry Playbook has a very nice design, one of the best available in recently released tablets. Its form factor is a sleek one and it has physical buttons located on the side. The body’s back has a rubberized finish and you will also notice a symbol made of chrome, representing the Blackberry logo. The tablet has two cameras which are integrated into the design quite well, making them less visible. The same can be said for the stereo speakers, which are located on the front side’s lateral edges.

The tablet doesn’t actually have any physical buttons, using a digital user interface instead, which is accessed with the help of the capacitive touch screen. There is one small downside, caused by the tablet’s size, and that is the fact that the power button might be hard to operate. In the same area you will also notice the buttons for the sound volume.

The Playbook is a very light and thin model, with just 0.9 pounds in weight and 0.4 inches in thickness. It measure 5×7 inches and the exterior look of the model is much better than that of most of its competitors, which have more of a plastic look.

While the size of the tablet might be too small for some, for others it will be perfect, since it allows for extra mobility for its owner. The display screen is also large enough to allow people to read a book or watch videos.

The OS present on this tablet is an elegant one and RIM has done a very good job with it. We’re sorry actually that we can’t have the quality of the interface from the Playbook and the number of apps available on Android or iOS. It would make for the perfect tablet.

Playing video trailers at HD quality works well on YouTube and there were no problems with the fluidity of the videos which were tested.

The Blackberry Playbook has a great interface, a form factor which is quite elegant, a quality display, a size which is compact and very good performances. The only downsides are the small number of apps, but hopefully that aspect will be improved in time. 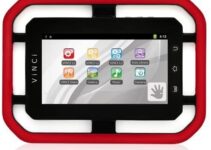