Good buy for your first digital photo frame. A well known manufacturer of LCD monitors, ViewSonic has entered the digital photo frame market as well, which seems like a natural move considering that the technology is about the same. The DPG807BK is a frame released by them and it’s an 8 inch model, with a 4 to 3 ratio and an internal memory of 512MB. It’s quite cheap as well, so it should be one of the models you’re considering if you have a limited budget.

All in all, this is a very nice looking frame, with a finish of piano black which is sleek. The material used is plastic only, so no metal or wood borders here, but even so, this frame doesn’t appear cheap. It has a kickstand which swivels, so you can use the frame both in portrait and landscape mode. Besides these two, you have the option of mounting it with screws, on a wall. The black finish does look pretty good, but it’s not that great if you touch it all the time. It seems to attract fingerprints, which isn’t ideal when you consider that it has controls which are touch sensitive, on the bezel from the bottom. Fingerprints are a guarantee thanks to this. A nice thing about the touch system is that the buttons will become blue when the frame is touched, turning off after a couple of seconds.

We’ve found the buttons not as responsive as we would’ve liked and the interface can be a bit confusing, even though it can’t be considered complex. It doesn’t take long to get used to it though, as long as you keep the manual close for the first few days.

The frame’s internal memory can be expanded with all kinds of memory cards (Memory Stick, MMC, SD) and USB flash drives. You also have the option to connect the camera to the frame with the help of a USB connection.

Considering the price class in which this frame is, the internal memory of 512 is not bad at all. The images can be copied from USB drives, cameras or memory cards to the digital frame and they will be resized automatically to the resolution of the screen, which is 800×600. The copying process is a bit more complex than necessary.

The frame offers a number of features which aren’t always found on models considered as entry-level. Among these features you can find MP3 and video playback, or the calendar with the alarm built-in. The frame comes with two speakers on the back.

While this is not a very fast digital frame, the performances were decent and about the same as what you can expect from models which are offered at this price point. The quality of the images is OK, with natural colors and sharp images. There is one problem with the screen, which is the glare which appears when you prop the frame at some angles. While most frames come with a matte display, the DPG807BK has a reflective layer on its screen. 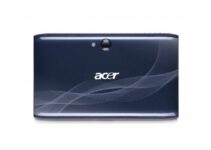