The Vinci 7-inch Touchscreen Mobile Learning Tablet is a relatively unique tablet, in that it is designed to be used by children under four years of age. This is fairly evident as soon as you open the package and see that the tablet is surrounded by a bumper that is attached firmly to it, doubling up in function as both a protection and a handle with which little hands can easily hold the tablet.

It is important to note that this tablet is designed for the youngest of children. Aimed at children from birth to just four years old, it has very simple software and even the hardware is deliberately limited, and this would make it annoying and unsuitable for older children.

Some people may wonder why a parent would buy a tablet-especially one so expensive-for so young a child. The simple fact is that with or without permission, our little ones are going to try and explore the world around them, and when that world includes computers, tablets and cell phones, they will find a way to get their hands on them.

The tablets owned by the parent in this case are worth far more than this simple device, hence the simple hope is that by buying this tablet, ours will be that little bit safer. Not only that, but during the ages where the child is most likely to throw or drop things, the tablet that they will be playing with is built to handle that kind of punishment.

There is a camera built in, and the suggestion is that it is for the parent’s use. However, children learn quickly soon come to enjoy being able to take their own photographs. The camera is comparable to many that are built into tablets, in that it isn’t the best but fulfills its intended purpose.

WiFi is lacking-deliberately not installed on the device, and that is somewhat of a relief given that the device is used by children. As soon as they learn how and where to install new apps or games, the temptation becomes too great and they either try to do it alone or bug the parents! This way there is no chance that the kids could be exposed to inappropriate material.

Software that comes included on the device includes a wide range of games, all with learning goals that kids seem to delight in. There are music videos and story books that you can share with your child as well, and more to come in the future. The software is easily updated by connecting the device to your computer via the USB port.

Though limited in the specs that this device carries, it has a lot of pluses. It is sturdy and well built, with specialist software that will help even the youngest of children start to learn about the high tech world that we now live in. More important even than that, it will help to keep sticky fingers from messing up your own rather nice learning tablet device. 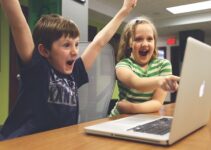